Dubrovnik, or ‘Kings Landing’ as it should probably now be known, is located in the South of Croatia. The small city is essentially made up of the Old Town, surrounded by mountains and a few more modern structures. Settled on the coast, it is a large port city that currently attracts hundreds of tourists throughout the summer, most of which are probably wondering around asking ‘where are the dragons?’

The Old Town of Dubrovnik is indeed its biggest attraction. Other than the Old Town you have the option of either ascending the adjacent mountain via cable car in order to see some spectacular views of the city and the ocean (I didn’t do this but I have an imagination and saw a picture, so…) or you can travel out by boat or kayak to the nearby islands. Ferries come in and out of the port all day, delivering tourists like flocks of sheep. Entering the Old Town can become troublesome (unless you can read a map and realize that there are actually two other entrances towards the back which seem to be less populated). If you are unfortunate to end up stuck entering the main entrance, then you better be ready to be incredibly patient or deliver some flying elbows. Seriously though, just walk around the to the left of the main entrance in search of the other entrance unless you’re an MMA fighter.

Other than the obvious attraction of seeing where much of Game of Thrones is filmed (Kings Landing and much of Meereen) the old buildings are attraction enough in themselves. The many tall narrow streets are great to explore but bear in mind there is a shitload of steps to climb. These are worth it as the ascension to the top of the city allows you to gaze down over through these narrow streets and above the orange tiled rooftops. The best way to see across the Old Town, or over to the ocean, is to climb the city walls (there are stairs, I don’t mean start scaling the walls, you’re not Spiderman) which costs about 200 Kunas (£20) per person. A word of warning, every time you descend the walls and later return you are expected to pay for the simple privilege once again. The best way to avoid this is to pay for a CityPass ticket which allows you access to the walls as well as various other museums. There are also walking tours along the walls and through the city that you can pay for, some of which lead you through the places in which Game of Thrones has filmed. If you don’t feel like rustling through your wallet, it is perfectly acceptable just to wander through the city and admire the beautiful architecture on offer.

There are loads of restaurants dotted throughout the Old Town, many of which located in idyllic little spots tucked away behind narrow streets in hidden plazas. As the evening comes and turns into night the town is a lot nicer. The sun settles down so you aren’t constantly fighting of streams of sweat erupting from your forehead, and the temperature becomes perfect. With the many bars and restaurants, you can eat in a variety of scenic locations. If you want to be in the bustle of the town then there are loads of local restaurants tucked away in the narrow streets, or in the plazas, or along the main street originating from the main entrance. If you prefer somewhere a little quieter, then there are several spots alongside the old port that are a bit more peaceful, but still offer a great atmosphere. Somewhere above the old port, there is even a 360 restaurant, now doesn’t that sound exciting? 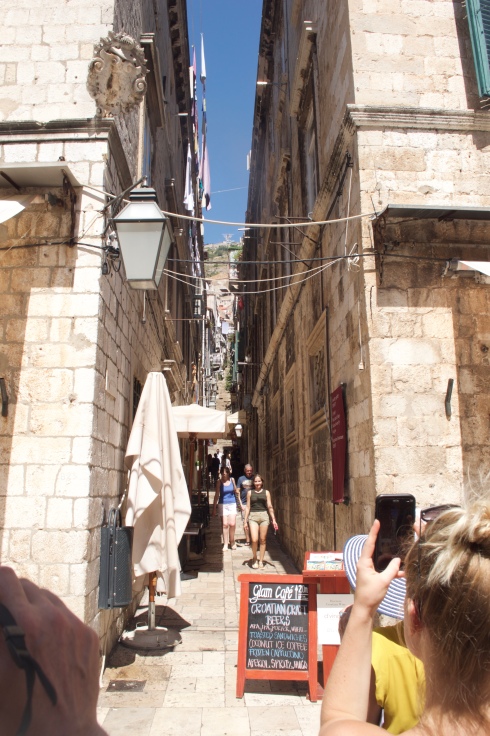